We love this photo from Ian Riley Photography ! Happy Thursday!! 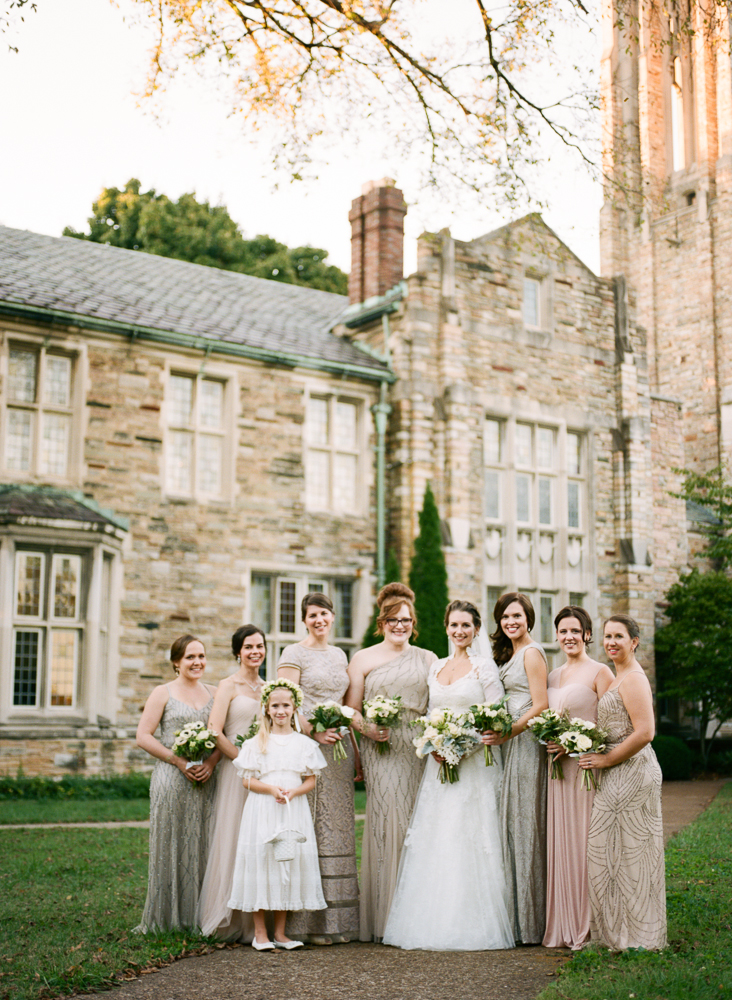 To schedule an appointment with Ian Riley Photography, contact us today studiowednashville@gmail.com !

Your wedding is one of the most important days of your life. You will want everyone to be there to share the special moments of that day with you and your loved one. Unfortunately, not everyone is fortunate enough to have everyone with them on their wedding day. Whether you have lost a parent, grandparent, brother, sister, or even a beloved pet, there is a part of you that just won’t feel the same if they aren’t with you on your special day. 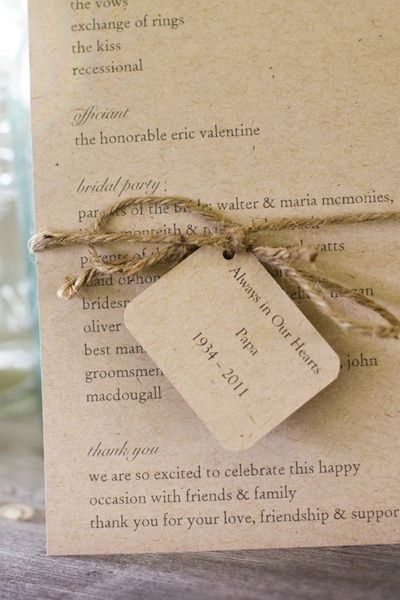 Now a days there are many ways to honor those who could not be there with you at your wedding. While honoring your loved one, you’ll want to make the touch meaningful, yet very subtle, so that it does not distract from the joy of your wedding day. 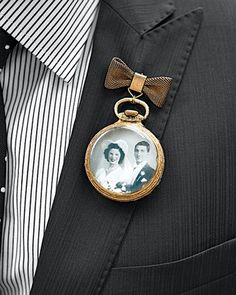 One way to honor your lost loved one is to wear something of theirs or something that reminds you greatly of them. This will help you to know that they are with you throughout your wedding day. It could even be your something ‘Borrowed’ or something ‘Blue’. Even incorporating their photo or letter from them in your bouquet or handkerchief. 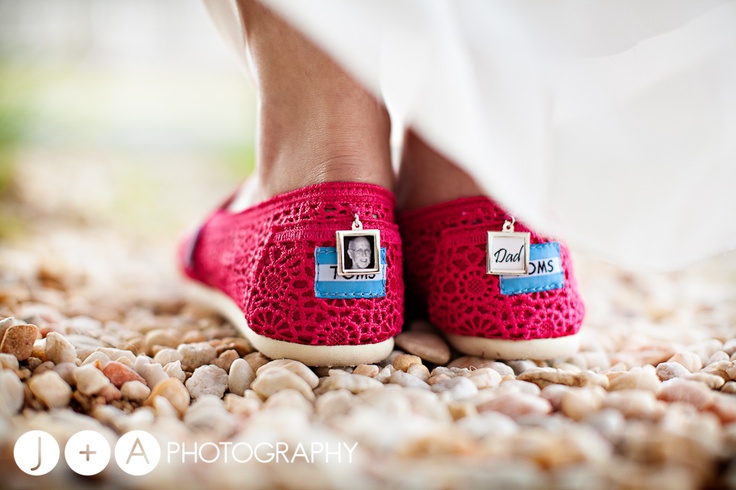 For a more subtle approach, you could add a snip it of in their memory in your wedding program. For example, ‘In loving memory of…’ or a quote of theirs. 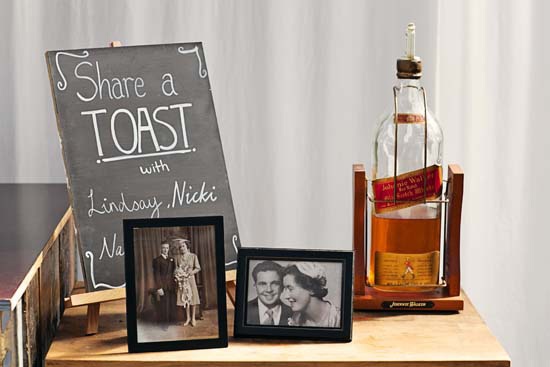 One of the more widely thought of ways to honor lost loved ones at your wedding is to light a candle in their memory next to  their portrait with some of their belongings or with a framed letter so that you’re able to honor them and so is anyone else who sees their memorial at your wedding. If you’ve lost more than one loved one or if your spouse has lost someone as well, it’s a beautiful idea to have a table dedicated to lost loved ones. 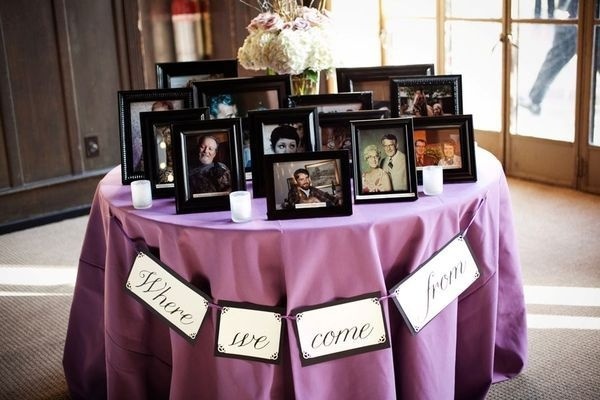 Other ways of honoring your lost loved ones include, toasting in their memory, having a moment of silence, reading their favorite poem or a letter from them in your speech, giving out their favorite made recipe as favors and the most touching idea and my favorite, is saving them a seat at your ceremony and reception. 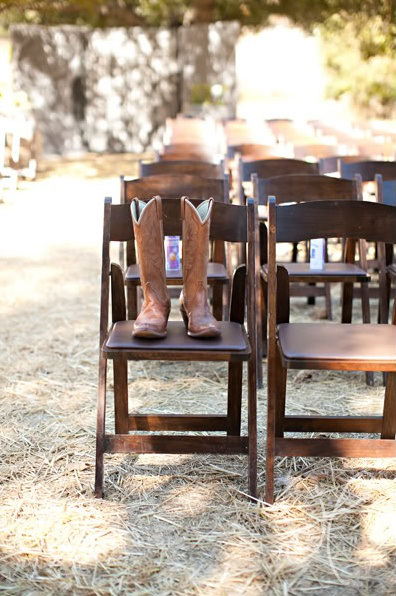 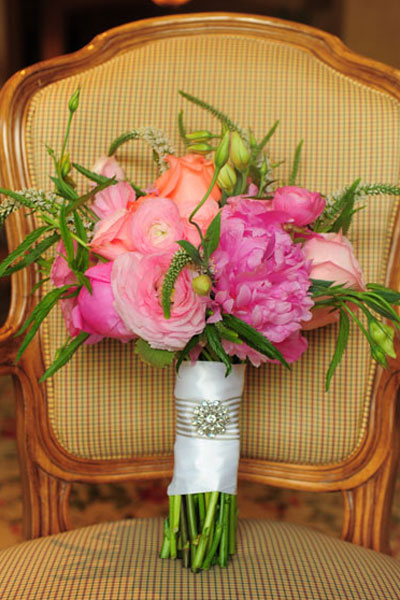 We would love to hear about your story and how you incorporated your lost loved one into your special day. Please email us at, studiowednashville@gmail.com

Nicole Wolfe was born and raised in the greater New Orleans area, growing up around some of the most delicious and diverse cuisine in the world. While attending college at the University of Louisiana in Lafayette, her love of baking and cooking grew as she worked towards her degree in Hospitality Management. After graduating, she realized her passion was not in management, but in actual hands-on production and development of gourmet cuisine. The foundation was laid for her pastry career at Flour Power in Chalmette, LA under the tutelage of Doyle Deforrest. In 2004, she was accepted a career opportunity in Nashville, TN. Since then, Wolfe has worked as a pastry chef in several of Nashville’s most prestigious restaurants and catering venues including: Watermark, The Red Pony, The Bake Shoppe, and The Turnip Truck Gulch location.

Wolfe’s long-time goal has been to own her own cake and dessert business, and in 2011, she opened Wolfe Gourmet Cakes. Nicole can design just about any idea you throw her way. Wolfe Gourmet comes up with stunning grooms cakes, wedding cakes, and much much more! 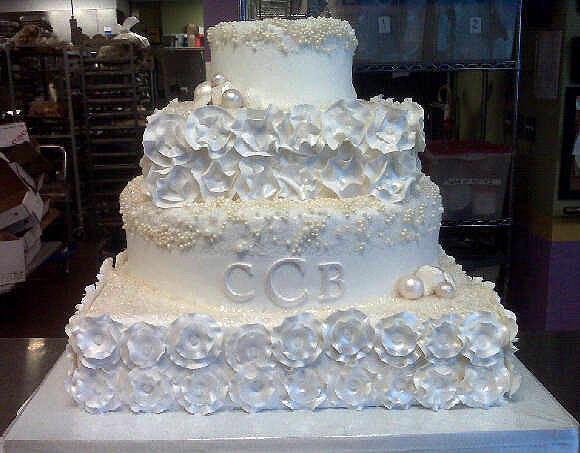 Here’s what some of her clients are saying about her:

“I must admit, our wedding cupcakes were not the first I had tasted of Nicole’s cakes. If you haven’t had one of her King Cakes, you are truly missing out!
When meeting with Nicole for cake tasting for our wedding, she had so many different flavors to choose from! We are pretty plain– so she ended up doing vanilla, chocolate, strawberry and lemon cupcakes, which were DELICIOUS! I think the strawberry literally got devoured. She also did a coconut cutting cake. I don’t even like coconut and it was amazing. Luckily, I still have tons of cupcakes in my freezer :). In addition to being an excellent baker, Nicole was so easy to work with. Can’t say enough about Nicole!” – Shelby

“Wolfe Cakes was so great to work with and produced the best cake I have ever had at a wedding. I had a general, basic idea of what I wanted our cake to look like and met with Nicole, she sketched it out immediately and nailed it. The cake was beautiful in person and exactly what I wanted. Nicole is extremely professional and takes pride in her work. We also had pies at our reception which were gorgeous and delicious!” – Claire

“Nicole Wolfe created exactly what we wanted for our wedding cake. My mom actually had the most design vision and Nicole was able to create what she wanted. We had a 3 layer cake with 2 different flavors and we also had bite size pies and cheesecakes. Our guests raved about it all and luckily we had two days before leaving for the honeymoon to snack on leftovers! The presentation was perfect but the taste was to die for! Nicole was very responsive and dedicated to perfectly creating our vision. The price was a little high but Nicole worked with our budget. A lot of time went into all the little pieces and you get what you pay for! If you use McConnell House for your reception, Nicole’s kitchen is located inside making transportation easy! Nicole also made us a special anniversary cake and had it perfectly packaged for the freezer. Can’t wait for our first anniversary!” – Casey 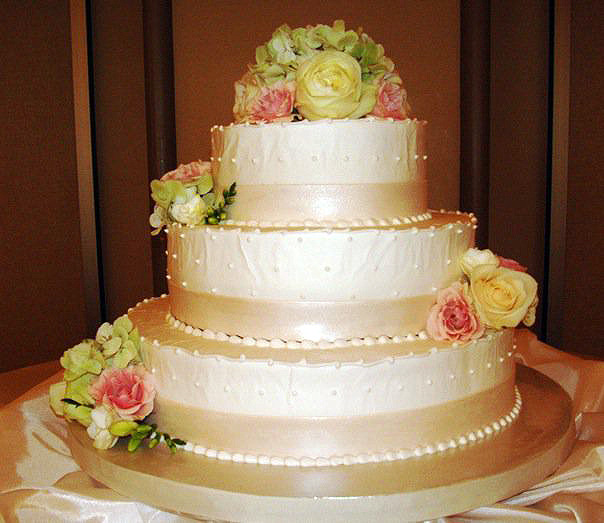 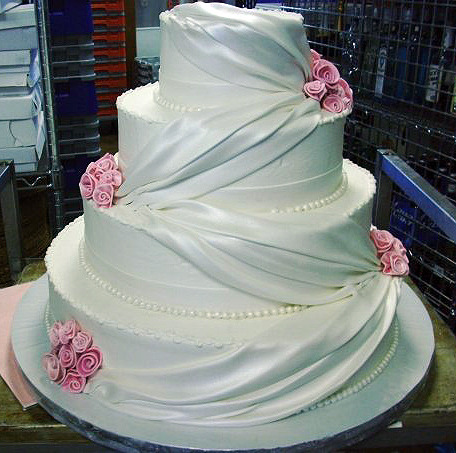 Choosing a color theme for your wedding can be very tricky. There are a numerous options to choose from. Weather you want a more temporary or contemporary color can be the hardest choice. You want the color you choose to have your guests in awe as in something they will never forget.

Marsala is Pantone’s color of the year. Marsala is a perfect color for everything from flower arrangements, to save the dates, to styling and much more. The radiant color is the perfect blend of red, brown, and nude. Marsala is a subtly seductive shade, which draws us in to it’s an embracing warmth. This sweet amber shade would be  perfect for your wedding. 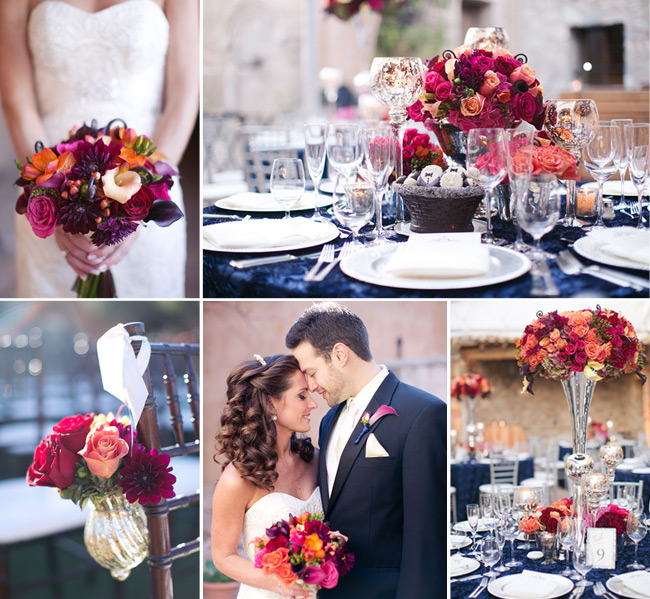 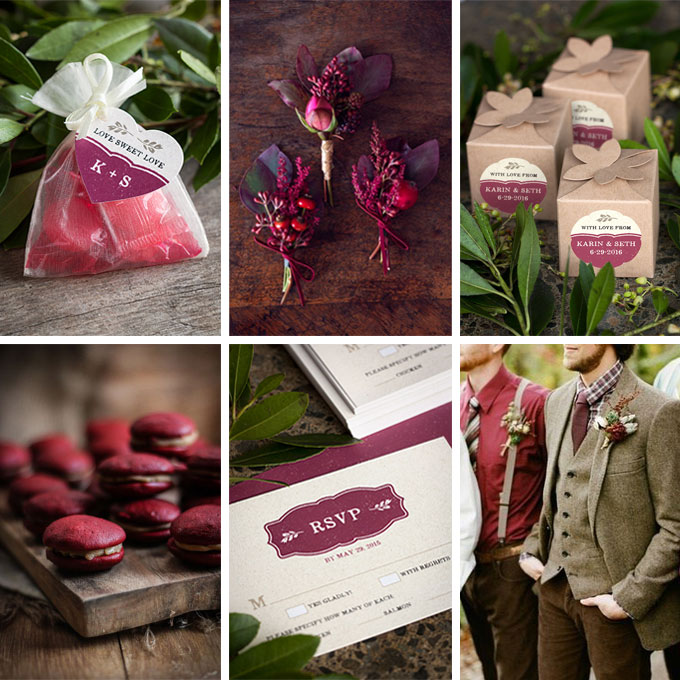 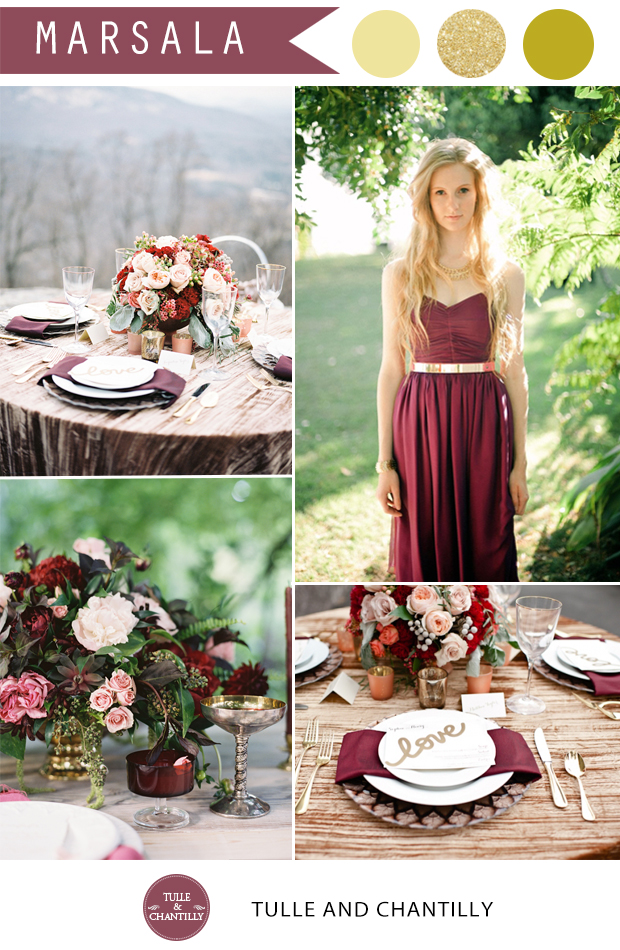 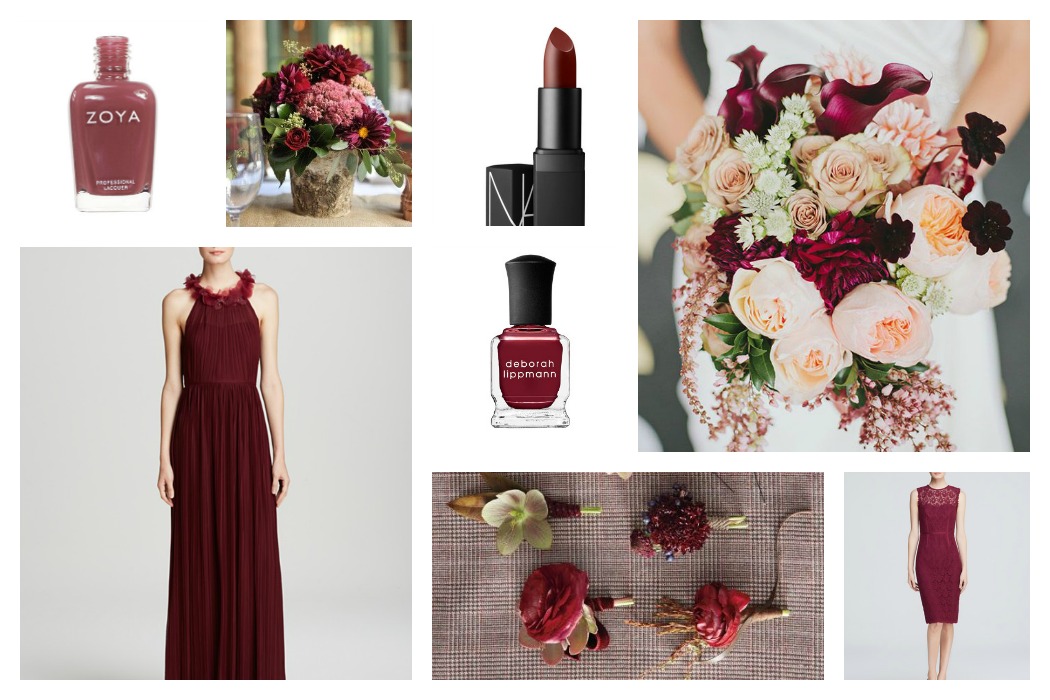